People do not live from bread alone – they sometimes need something sweet –perhaps, a candy can help with a cough during an emergency. 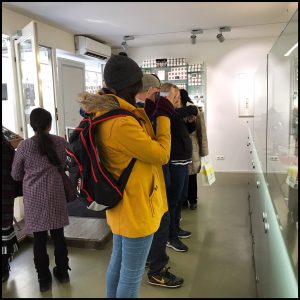 I am curious how candies are made at Zuckerlwerkstatt in Vienna’s Herrengasse and arrange to meet Christian Mayer directly there. Sugar is converted into real works of art before the eyes of amazed onlookers here every day, starting at 11 a.m. As I walk in, I have the luck to be alone with the masters and so they can answer my questions, while they pour hot candy from the copper vat onto a spotless countertop made of black granite and start working on it. 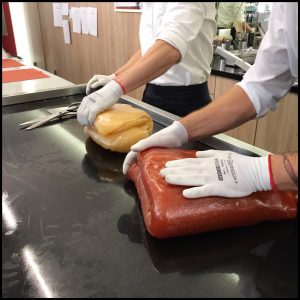 I would like to know what is on the production plan today – in other words, what will the 115°c mass of hot candy be turned into. Christian Mayer – the founder of Zuckerlwerkstatt and his employee Philipp are constantly on the move – with well-practiced hand movements and they spread the hot candy on the cool granite surface each using two spatulas, before the “flavor” is added. 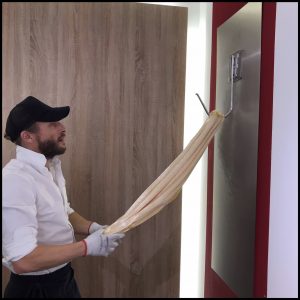 “We are very precise about our ingredients” – I learn – Vienna’s own sugar brand Wiener Zucker, a little glucose and only natural ingredients can be found in these Viennese candies, of which there is a huge variety. Citric acid and natural orange oil are being used for the 60 kg of sour drops planned for today. The candy mass is split into two – one half will be flavored with the citric acid and the other half with the orange oil.  Now, the two types of candy are being kneaded quickly – first with a spatula and then by hand. After all, the candy should cool evenly and have flavor added …

As the two work, I count the types of sweets on display, which include exotic flavors such as lychee, pomegranate, honey melon and white currant. They work together with Austrian 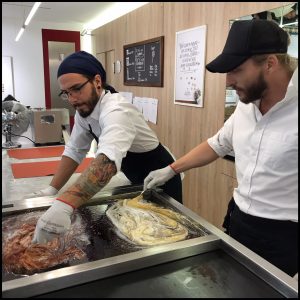 suppliers that guarantee the same, constant high level of quality for their exclusively natural ingredients that give the candies their unique flavor. The colors used also come from natural ingredients such as black carrot and spirulina, just to name two.

In the meantime, a small audience has gathered behind the glass window and watches the 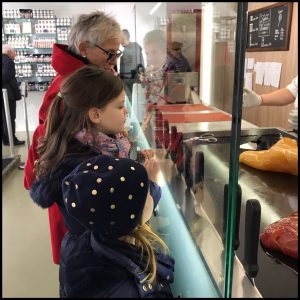 production with reverence. The candy is still very warm and is being thrown over a hook on the wall in an artistic way and stretched repeatedly, during which the color changes from a golden yellow to a very pale yellow…. Christian Mayer talks about (mostly) the children who stand in amazement with their noses pressed against the window as they watch what is happening, as he cuts the warm candy into small pieces with scissors and passes them to the onlookers. This still very pleasantly elastic, warm candy suddenly turns rock hard in the mouth –  oh, the wonders of chemistry! The sour drops taste heavenly even before they have gained their exterior Beauty. 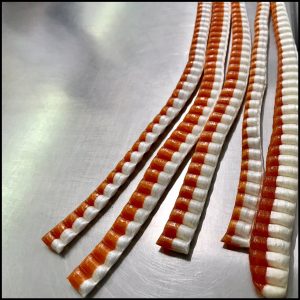 Now, both colors of light yellow and orange are bound together into a long strand and passed through a self-made machine that presses the strands of candy together at even intervals before they glide onto a highly polished, stainless steel surface at the other end. Then, the cooled candy can be easily separated into the pre-cut elements and get coated in powdered sugar to stop them sticking together later. Thus, about 18 kg of candies are created in around 45 minutes. I also would like to know how much candy is produced each month and learn that 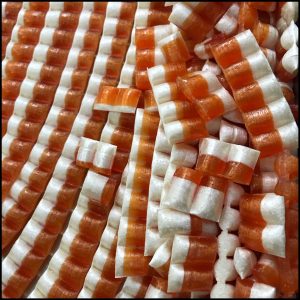 between 2 and 2.5 tons is made every month – a large portion of which is made very individually for companies that have their logo or name put on the sweet “bait” or for wedding parties that would like to sweeten their special day, or for Christmas, New Year or other events at which something special can be offered. “These candies are literally engineered,” says Christian Mayer. “We are candy engineers!“ You can follow this engineering process in the cool videos – the latest addition is the Wiener Walzenzuckerl, an original Viennese candy. The candymakers originally got the machines from a retired businessman and restored them. Now, they are working again and are impressing fans both young and old.

At Zuckerlwerkstatt, tradition is really kept going and craftsmanship 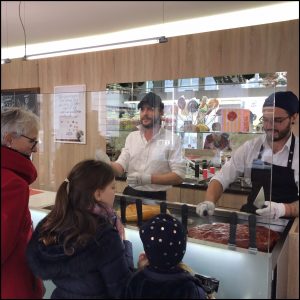 is brought back to life – this was a professional trade until into the 1960s. About 1,400 staff were involved in candy production at the well-known Heller candy factory in Vienna. Today, the Heller candies in the old catalogs are a reminder of times gone by.

However, Zuckerlwerkstatt is cutting-edge and open to new Projects, 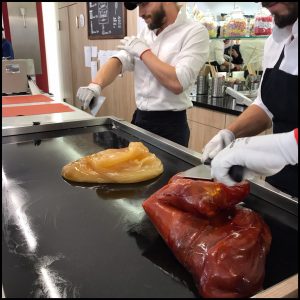 as well as maintaining traditions. For example, there was a special project about sugar by Honey&Bunny for Vienna Design Week last September that attracted a lot of attention.

The batch of sour drops is ready and I am really impressed from what I have heard. I get a sample and say goodbye to the candy engineers.

As I walk along Herrengasse with that lovely sour taste on my tongue, I am certain that the quality of the candies is well worth the walk!