Kettle Drums, Trumpets and a “Geiger” Counter – A Visit to the Wiener Symphoniker 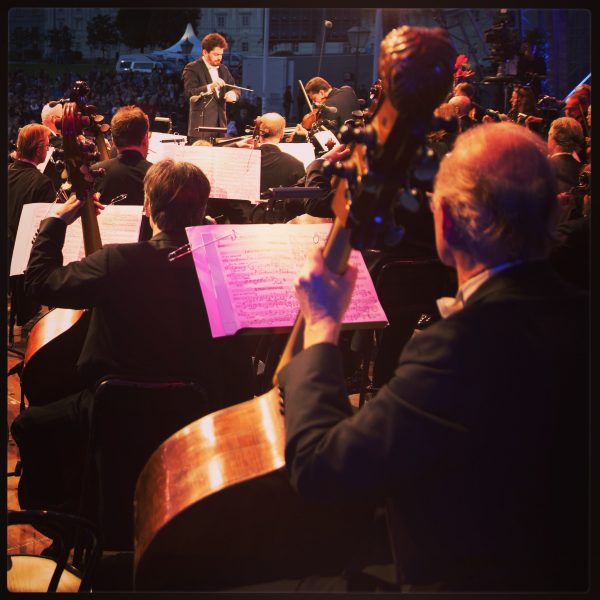 As the orchestra of the City of Vienna, the Wiener Symphoniker (Vienna Symphonic Orchestra) is a cultural ambassador for a music metropolis and helps earn the city’s good reputation with excellent performances at home and abroad.

I am really curious to find out how such an orchestra works, what the Wiener Symphoniker have on their program and, so, I look up their address on the WIEN PRODUCTS city map. When I call Quirin Gerstenecker, the Marketing Manager, and tell him about the blog, he suggests I come and meet the orchestra and staff members on stage and behind the scenes at the dress rehearsal for the “Fest der Freude” on Heldenplatz. I am very pleased with his suggestion, and I end up meeting a large number of people who are deeply involved in music and the organizational processes surrounding it at Vienna’s epicenter on May 7th. 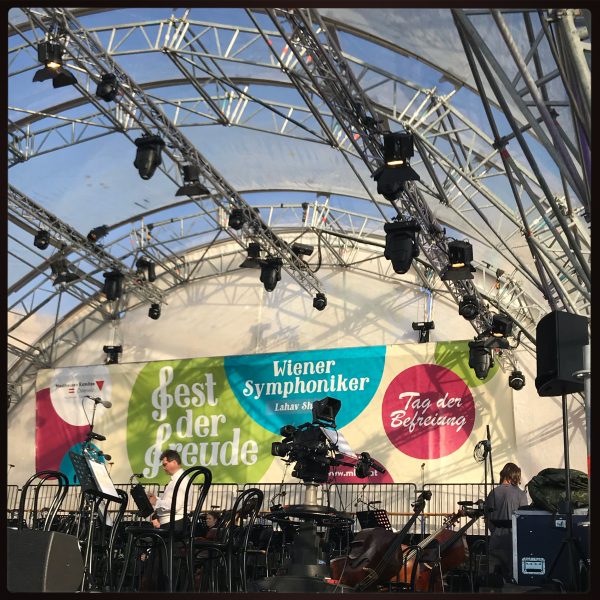 The stage has already been put together, technicians and floor managers from state broadcaster ORF brush past me and adjust cameras and microphones. The first musicians have taken their seats and prepare for the rehearsal.

Quirin Gerstenecker tells me that the concert on May 8th is a very emotional affair for the Wiener Symphoniker and that the orchestra and solo artists are performing for free and everyone can come and watch them live for without paying.

Meanwhile, the stage is full. The majority of the 128 musicians is here today – there is also a harp and quite a number of percussion instruments, in addition to the more “manageable” instruments such as violins, violas and cellos, brass and wind instruments – several double basses are also standing in the background. I am interested in who brings the instruments to the venue and meet Bernhard Kircher who is a music student himself and used to play for the orchestra – he has been Stage Manager and responsible for the orchestral equipment and its transportation for 20 years. He makes sure that the seats are right, everyone has the correct score and the instruments are there on time. This is quite a challenge – we are 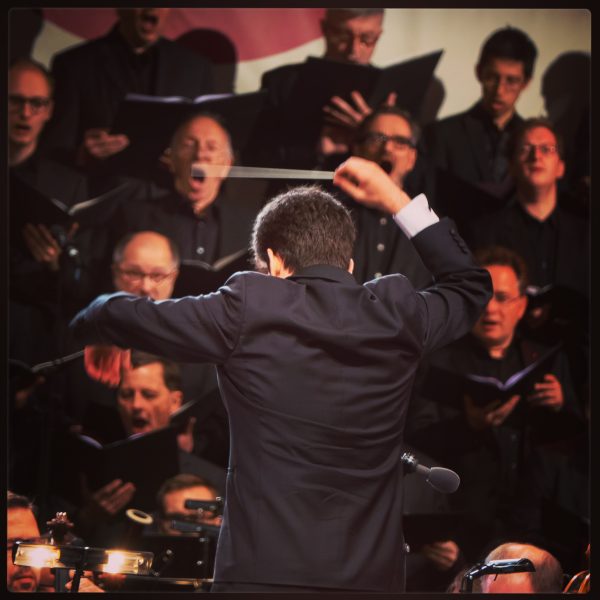 talking about at least 128 valuable and fragile instruments – some of them extremely valuable. Two violins and one cello come from precious instrumental collections and have been lent to the musicians. If we were to add up the value of all the orchestra’s instruments, we would arrive at a very high sum. One hundred crates and three large trucks are required when all instruments go on a concert tour says Bernhard Kircher – but it always depends on the program – there are pieces by Berlioz, for example, that use 14 kettledrums. Quirin Gerstenecker tells me that Hector Berlioz will be one of the focal points of next year’s program — the orchestra under chief conductor Philippe Jordan has performed and recorded a wide range of Beethoven’s works very successfully this year.

The Wiener Symphoniker’s calendar is pretty crowded, in principle… 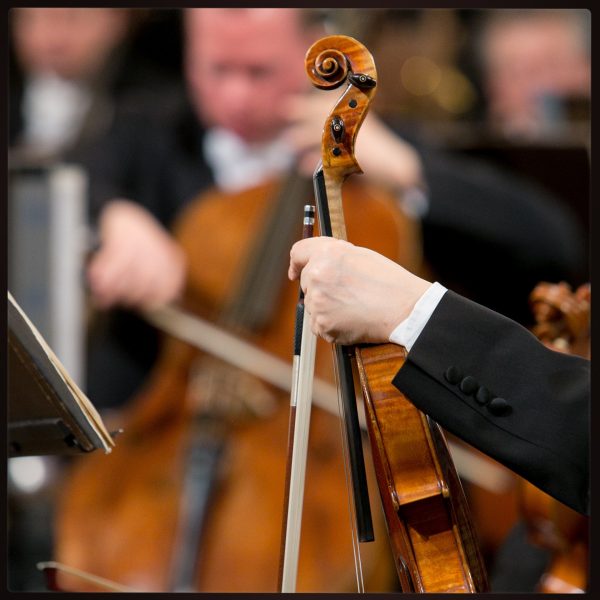 In 2018, the so-called “Grätzl” concerts were introduced in Vienna at which the musicians play at unusual locations across the city’s districts. A great initiative – the concerts are very well received by the audience and it even attracts people to classical music who usually are not so interested in this genre. The tickets are less expensive than at the Musikverein or Konzerthaus and the set list includes more popular pieces – still, there is no question about the excellent quality of the musical performances given.

I enquire about the orchestra’s plans for this summer and I am told that there will be five concerts at the MuseumsQuartier Wien, in addition to the Grätzl concerts, six concerts at the Musikverein and seven at the Konzerthaus before the end of the current season; then there will be tours to Paris, Switzerland and Germany, followed by Bregenz, where the Wiener Symphoniker will play three orchestra concerts at the Festspielhaus, in addition to their performances on the Seebühne as part of the festival program, which features CARMEN. The Day of the Wiener Symphoniker is a nice tradition at which individual groups of musicians will perform in the city center of Bregenz on the weekend before the festival. 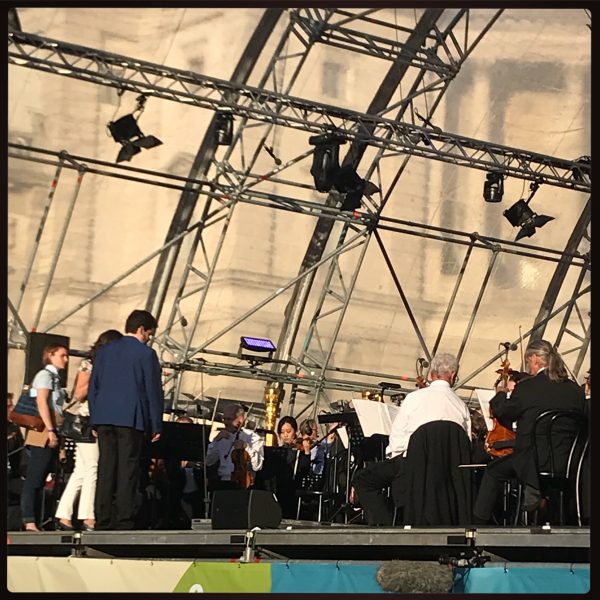 While we are talking, all musicians have taken their seats on the stage, conductor Lahav Shani is at his stand and the soloists are ready for the rehearsal. A woman stands in front of the orchestra with a pile of lists and announces the exact procedure for the rehearsal and any changes. Once the conductor takes over, and the music begins, she joins us – the woman is Corinne Pixner, who has been working for the orchestra administration for 11 years. I ask her about her concrete responsibilities at the Wiener Symphoniker and find out that she is responsible for the management and coordination of the musicians. “Some even call me ‘Geiger counter’ as a joke,“ she tells me laughing. 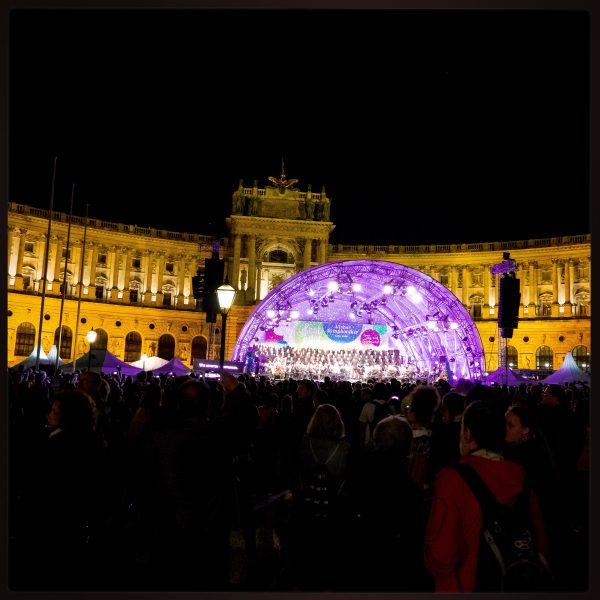 She shows me the plans for this concert – they say exactly who has to be at which rehearsal at what time and how many timpanists, trumpeters, violinists and cellists, flutists and bassoonists are in action during which part of the concert.

A challenging task. However, she enjoys doing it she says and yes – she is an active musician outside the orchestra – her understanding of music and musicians is surely a plus in her job. 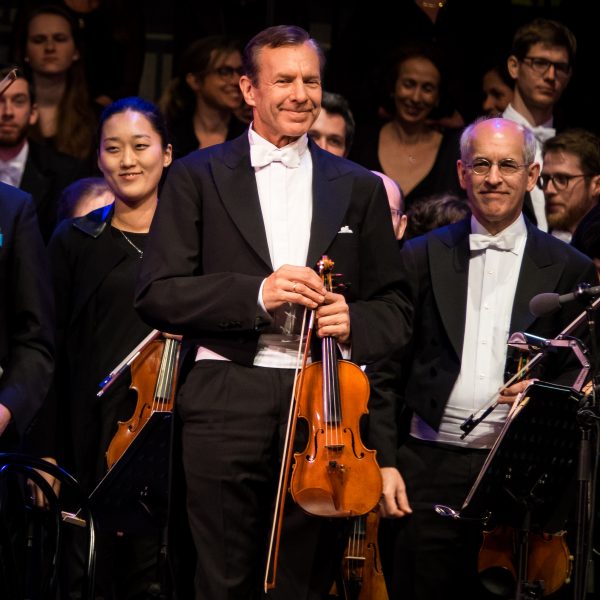 Finally, I want to know what the future holds in store for the orchestra. Quirin Gerstenecker gives me two facts: younger and more women. A change of generations lies a few years down the road, when a number of musicians retire and there are more and more women applying for the auditions. An important ambition for the Wiener Symphoniker is that good musicians will continue to be trained in Vienna in the future – they go to schools and organize concerts and workshops, bringing their love of music closer to the next generations.

I enjoy the music, the setting sun being the perfect complement to the excellent atmosphere. I say my goodbyes and leave Heldenplatz, but I am certain that the excellent quality of the Wiener Symphoniker is definitely worth the walk to a concert!