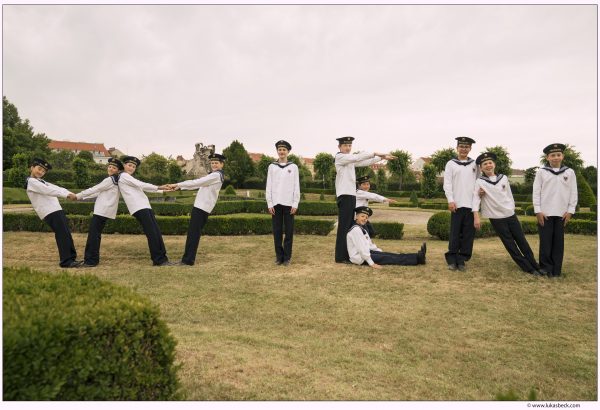 The roots of the Vienna Boys Choir stretch as far back as 1498 – an incredible 520 years.

You see and hear them often – not only in Vienna. I would like to know more about these musical ambassadors and take a look at my black and white WIEN PRODUCTS city map. A few days later, I meet up with Tina Breckwoldt, who is not only responsible for  Dramaturgy at the choir, but also for Public Relations, at the Palais Augarten.

This is the place the Vienna Boy Choir has used as its headquarters since the 1950s. And that can be heard far and wide on this day. Polyphonic singing floats into the park through the open window. It is 12:30 p.m. and the choir is rehearsing. 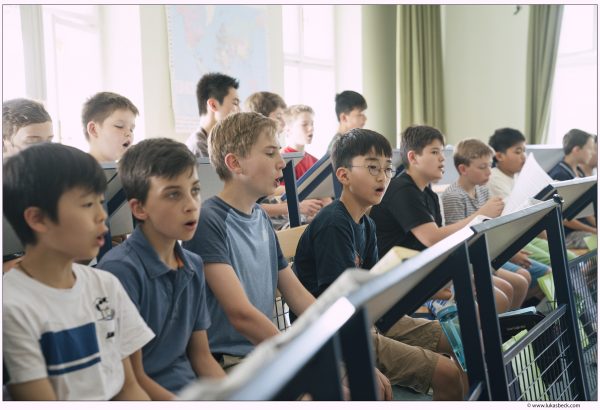 If you think there were 100 boys aged between 10 and 13 sitting in a room – you could not be further from the truth.

There are a total of four choirs, named after Bruckner, Haydn, Mozart and Schubert, each with 25 boys at the Vienna Boys Choir. One of the choirs is almost always on the road.  At the moment, 25 musicians and their entourage are touring around Asia for three months, delighting audiences at different concert halls. 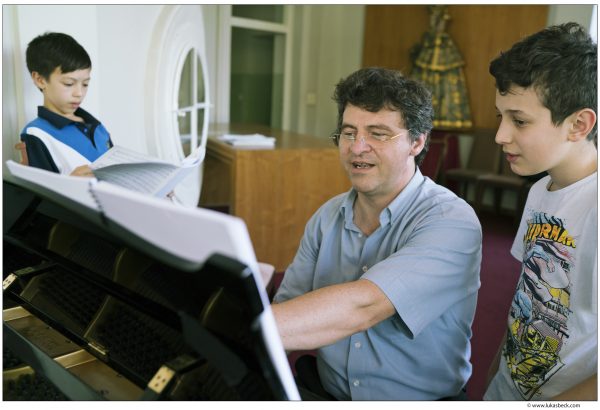 I am allowed to listen to a rehearsal and I am quite surprised! A particularly difficult part is practiced again and again, and in between, the Choir Master gives new directions, warns the boys to concentrate, claps the beat and explains the effect he would like to create.

It already sounds very good to my ears – but it doesn’t seem to be perfect.

A break – the boys go the canteen for lunch.  Staff members appear and coordinate diverse rehearsals and appointments with individual boys. 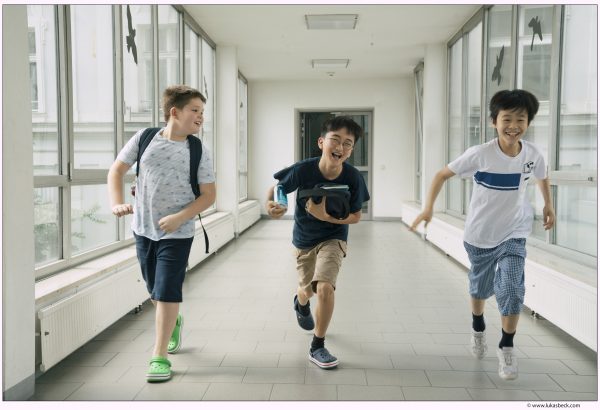 Dr. Breckwoldt tells me, in answer to my question, that not only the activities of the Vienna Boys Choir are based here in the Augarten, but also children who are on a possible path to becoming choristers are here in the on-site kindergarten. Additionally, there is an elementary school and a high school – a private school with public access, in which the young singers receive a top-class education and which is adapted for the choir’s special needs. 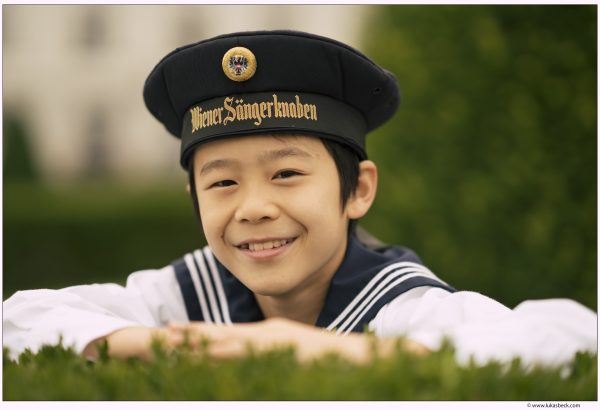 Shortly afterwards, we meet three active choir boys, who are booked in for solo rehearsals. Theo comes from Vienna and tells me he has been here since his pre-school years and is a dedicated choir boy because he would like to later go into a career in music. He enjoys singing and also plays the clarinet. I would like to know if he sleeps here overnight in the dormitory because he is from Vienna. Sure – he sleeps here except for one or two nights per week – it’s cool and fun to be with the other boys!

Luca has a much longer way home. He came from Berlin to be a chorister. He was impressed by the singing and has found his musical home here. Isn’t it strange – to be so far away from Berlin? No, not at all, he says – we travel around the world and experience a great deal – very few boys of this age get the chance to travel like the Vienna Choir boys…. 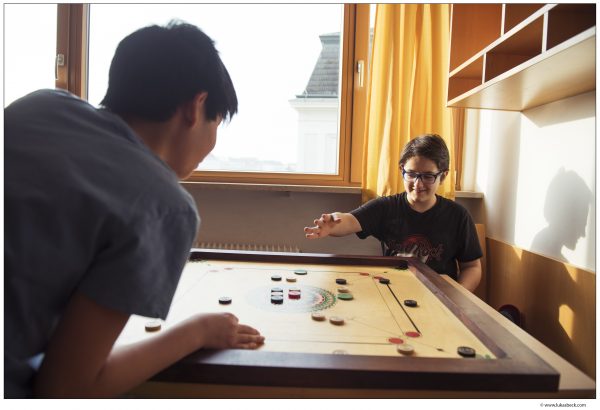 And what about the language?

“You learn it very fast, if you want to,” replies Satoshi, who comes from Japan and is in his third year of singing as a choir boy.  He speaks excellent German and explains to me that he went to a Vienna Boys Choir concert with his mother in Japan and had already seen them before on the television. He really wanted to be part of this community and is very proud of it. His eyes shine when he tells me how great it was when he got his uniform at a special handover ceremony. 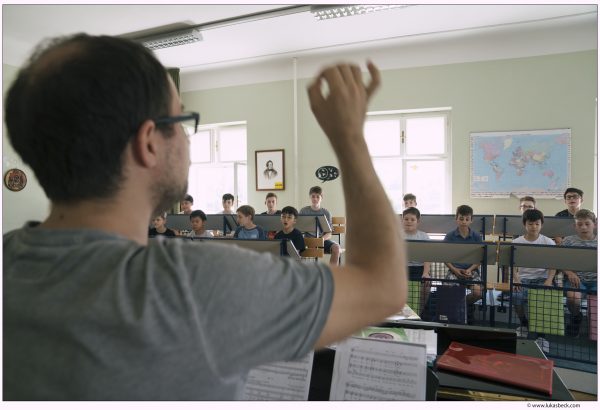 Interesting. I am amazed as the boys describe their daily routines to me, which include two hours of rehearsals after school and some free time before returning to school for more lessons. In between and afterwards, they study or play an instrument. On Sundays they sing the mass at the Hofburg Chapel – each of the choir boys once or twice a month..

We go to the Salon – a magnificent hall with stucco decorations and carpets and  a grand piano. Gerald Wirth, once a choir boy himself and now President and Music Director of the Vienna Boys Choir, is awaiting the boys for solo rehearsals with voice exercises and breathing techniques. He deals with each of the three boys calmly and extremely friendly, praising and motivating them. You might say the voices are clear and angelic. 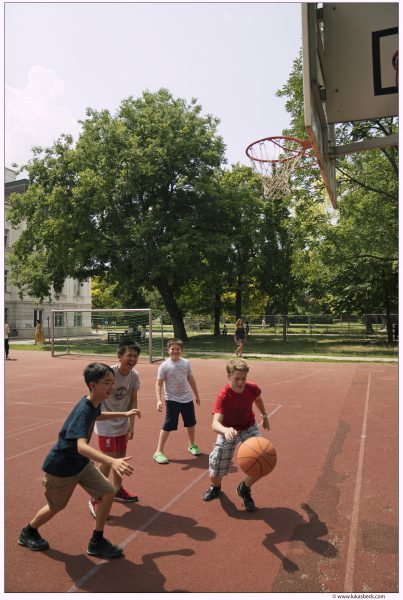 This musical treasure can be very useful at an official level. Emperor Maximillian, who is more or less considered to be the founder of the Vienna Boys Choir, already knew this as well. He already had a number of boys at his court at the end of the 15th century, who not only sang masses and for musical entertainment at the court, but accompanied him on his trips. The Vienna Boys Choir are still musical ambassadors today. Nowadays, there is great emphasis on musical variety and not just religious music. There are always new special projects, in which the boys are involved and which are given that special touch by their voices, in addition to folk songs from all over the world in many languages! Recently there was the preview of a film project by Curt Faudon called “The Good Shepherds” in the movie theater Gartenbaukino.  An unbelievably exciting project about environmental protection – a subject close to the hearts of the Vienna Boys Choir to which they have committed themselves. 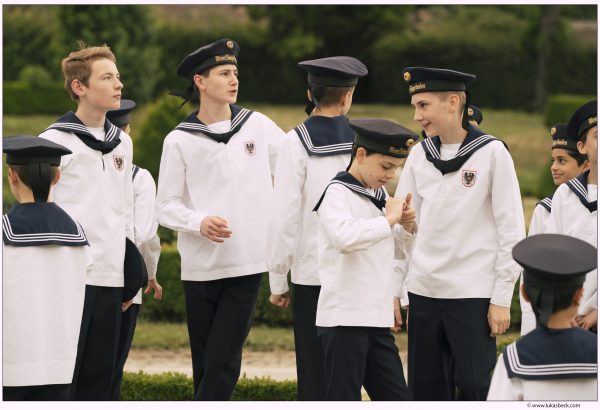 I am really impressed – I had not expected that. Dr. Breckwoldt answered my questions so patiently and in such great detail – I learn that almost 80 teachers, assistants and staff look after this musical talent – it is about securing what has been achieved up to now. The Vienna Boys Choir is not a public organization, but earns most of its own income itself. Meanwhile, they have even got their own on-site stage, with the help of private sponsors MuTh – a modern concert hall – has been built very close by.

There would still be a lot I could report, but time flew by. I said goodbye and walked through the park at the Palais Augarten. The musical quality of the Vienna Boys Choir is definitely worth a walk to one of their concerts.