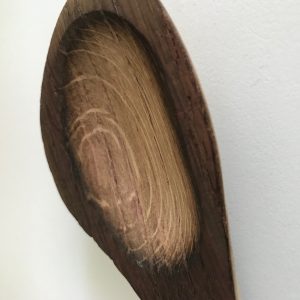 y Spoons – A Visit to TheCookingSpoon

It is no secret that spoons are designed for eating food – preferably, delicious food. However, a spoon that infuses food with flavor, such as TheCookingSpoon, makes me really curious. So, I arrange a meeting with Michael Mass and Ludwiga Drucker — the two inventors — at their office in Hietzing, Vienna’s 13th District, to find out more about these tasty cooking

“Well, it was partly coincidence,” the two tell me when I meet them and ask how they came to invent such an extraordinary cooking spoon. “I was cooking some chili con carne when someone told me not to leave the cooking spoon in the pot because it would absorb the food flavor and would pass the flavor on to the next dish when I cooked it.” 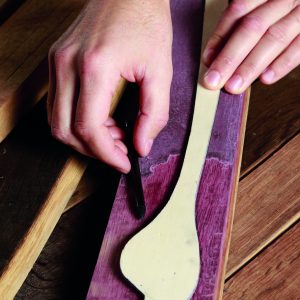 fact that a spoon with rich, red wine flavor could give food a special kick was more of whimsical theory at first, but this led rather quickly to the product following some research and experiments. TheCookingSpoon project became a favorite of the two entrepreneurs, who both have regular jobs in marketing. A project that requires permanent attention – as this spoon is handmade from staves taken from used barrique barrels from Austrian wine cellars. 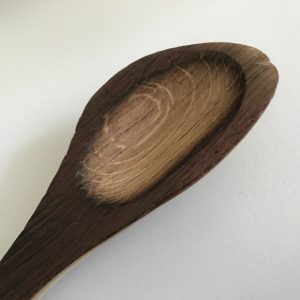 I am curious which wines have already released their flavor into Austria’s cooking pots and am told that it is quite difficult to get your hands on good, recently emptied barrique barrels and that each cask is a surprise.

“Wine is an Austrian cultural asset and our 16 Austrian wine-cellar partners produce excellent quality, which is the bread and butter of our spoons,” the two say enthusiastically. “Each edition has its own color and flavor.” 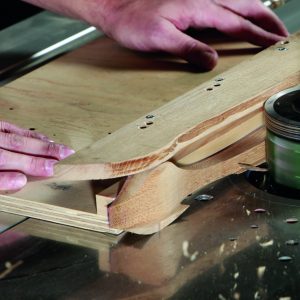 I am shown several spoons and, yes, they differ considerably in color as a result of the type of wine involved, the wood processing during barrel making and also the use of the barrel at the wine cellar. 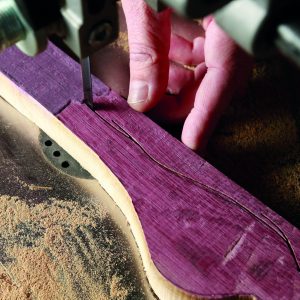 The oak wood, from which most casks are made, is between 120 and 150 years old before it is turned into a precious barrel. Each contains special red wine that is left to mature and is used for four to 10 years — sometimes even longer — before the wood finds its new use as aromatic spoons.

This all sounds very exciting and I receive a short lesson on the subject of spoons. This tool has been used by humans since the dawn of time and is modelled on a scooping hand.

Most people only used spoons and knives as cutlery up to the 19th Century. While spoons were mostly m 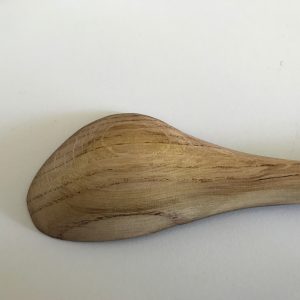 ade from horn, bone, wood or mother-of-pearl, precious metals such as silver and gold were used later and aluminum and stainless steel became the metal of choice in the 20th Century. There also used to be the profession of “spoon carver,” and even today, wooden spoons are still found in diverse shapes and types of wood in many cultures, where they have special functions, and particularly in different types of arts and handicrafts.

Spoons were considered to have a very special value that can be seen today in a number of sayings, such as: “born with a silver spoon in one’s mouth” or “a spoonful of sugar helps the medicine go down.”

Wikipedia defines 31 types of spoons as cutlery. So, people need spoons – each cook needs a cooking spoon and, even better, one with flavor! 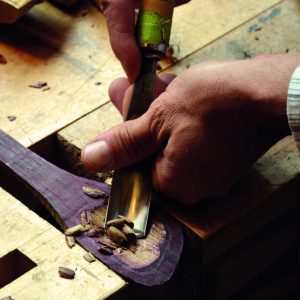 handcrafted traditionally by a carpenter, without the use of CNC or machines. The staves used as basic materials have a form that is too special for such equipment. I am told that two to 25 spoons can be made from one cask – if you’re unlucky the wood breaks and the stave is useless. However, one barrel makes about 14-16 spoons on average. Each spoon is marked with a serial number, the cask number and the wine cellar it came from to identify the wood used to carve 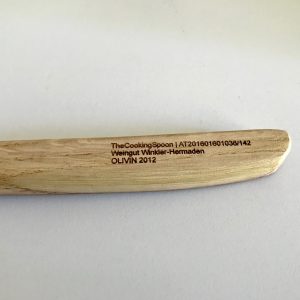 the spoon and which wine was responsible for the flavor. There are also special projects with companies that commission special editions for specific occasions.

The two entrepreneurs design the appropriate packaging for each edition – either for just a “TheCookingSpoon” or a cooking spoon with an appropriate bottle containing the same wine that infused the spoon. This is meant either for the cook to drink or “recharge” the spoon. The 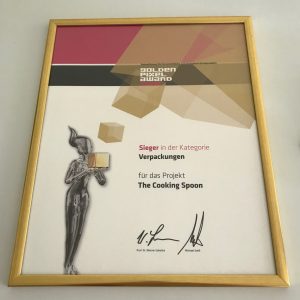 two inventors have already received a Golden Pixel Award for the design of their packaging.

Finally, I also want to know where I can buy the spoons. “We have great spoon partners in the gastronomy and restaurant business and special stores for (kitchen) design that can tell our story to customers perfectly,” says Ludwiga Drucker. Michael Mass adds that they would like to go beyond Austria and Europe – something they are currently preparing.

I say goodbye from both business partners and am certain that the quality of TheCookingSpoon is worth a walk to a spoon partner.