The Graben, which is situated in Vienna city center, is a boulevard with magnificent shop windows

and historic architecture. It is also the location of the Plague Column – a baroque Trinity Column – commissioned by Emperor Leopold I following the last plague epidemic in the late 17th century. This Trinity Column plays a special role in the past and present of Juwelier Heldwein Vienna – a family business that has its shop right next to it.

I have made an appointment with Anton Heldwein, the head of the company, who has agreed to answer my questions and also let me take a look at the in-house workshop, where special pieces of jewelry are created.

The business is now run by the fourth generation of the family, following its establishment in 1902, I am told. At that time, another Anton Heldwein and his wife Lotte founded a jeweler’s workshop on Milchgasse next to St. Peter’s Church. Their precious items became an instant hit with the Viennese and, more importantly, the Emperor, which quickly resulted in Juwelier Heldwein being awarded the title of K. & K. Hoflieferant – Purveyor to the Imperial and Royal Court. Business went well. At the beginning of the 1940s, the company mostly reworked and remodeled older pieces of jewelry until one day the premises became too small. As a result, the company moved to its current address at Graben 13 in 1943/44. 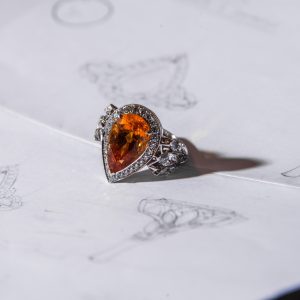 Juwelier Heldwein established its business in Vienna in 1902 – so I am curious whether anything has changed in this trade over the last century.

Mr. Heldwein explains that the trade itself has changed very little, only the tools are different. Drills, lasers, welding and soldering equipment work using electricity nowadays. This is probably also safer…I think to myself. Although, laser and welding equipment sounds unusual for making such fine, delicate pieces.

When we talk about a jeweler, the classic profession of the goldsmith comes to mind. I would like to know what other professions and know-how is required at Juwelier Heldwein Vienna.

Mr. Heldwein smiles and tells me that the company employs specialists who are trained as 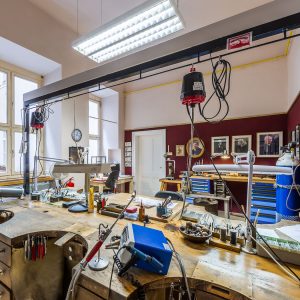 Wow, this really sounds exciting! So, what specialist training does the boss have himself? Anton Heldwein is an expert in two fields: namely as a master goldsmith and gemologist, an expert in precious stones, which is very useful when consulting customers in the selection of gems for their pieces. “Professional and honest advice is our name,” he says, with a hint of pride. Not only this, but career starters can also develop their skills here – we hired a young goldsmith this year who had just passed her apprentice exam. She will complement our in-house workshop team.” 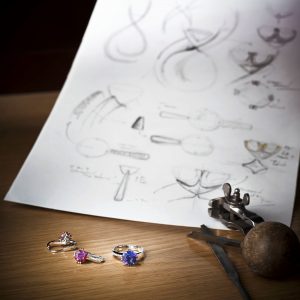 We take a walk through the workshop together – the staff members at the workbenches are calm and focused. The workshop is the heart of the firm. “Have you ever had unusual requests for a piece of jewelry by customers?” I want to know.

“Each piece we are asked to make for a customer is something special,” Anton Heldwein replies and adds “there is a lot of passion involved in our design processes and every design is then made into a piece of jewelry by our experienced staff using the highest quality, traditional Viennese artisan skills.”

What inspires Mr. Heldwein to come up with new designs? 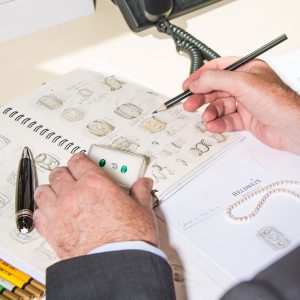 “My inspiration always begins with the gem. It’s not only the color, proportion and fire of the stone, but also a certain inspiring presence – the ‘wow effect’ — if you will — that also captivates the customer,” explains Anton Heldwein, while we watch a piece of jewelry being completed. Designs range from the classic to the modern – it is the workmanship that is crucial. This is where true quality is produced, one of the company’s maxims.

The item is stamped following careful quality control. This means that the piece is given the company’s hallmark to verify its origins – and this is closely linked to the Trinity Column. 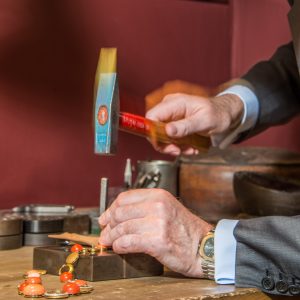 A really nice story, I think.

The hallmark was created by Hans Heldwein shortly after the business moved to the Graben. Its design was inspired by the Plague Column – others of which, by the way, can only found in the former countries of the Hapsburg Monarchy.

Apparently, Heldwein saw the letter H in the pedestal of this baroque column and the letter A in the clouds in the sky above it – the initials of founder Anton Heldwein.

With this in mind, he created the company’s stylized master hallmark. It has been the final s 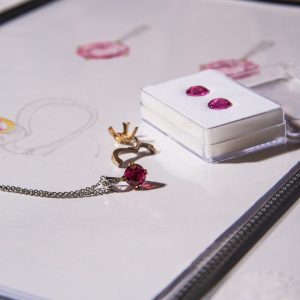 eal of quality on every single piece until today. The hallmark design was updated in 2008 and has become a little more simplified. However, it still adorns each masterpiece coming from the Juwelier Heldwein Vienna workshop.

We leave the workshop and take a look at the shop. This is where I me 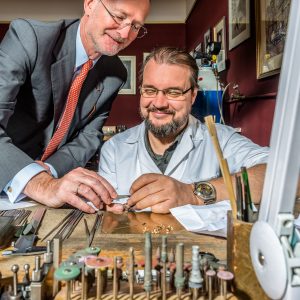 et Barbara Heldwein, the wife of Anton Heldwein, and I am told that the premises were completely redesigned and renovated in 2008 and that the shop offers a wide spectrum of jewelry and silverware by famous makers. Special emphasis is put on consulting and advice. There is even a separate room with a very special ambience reserved for consultations – discreetness is paramount!

Juwelier Heldwein is a family business – is there anything the owners are particularly proud of? This is something I would like to know before I leave and I am given a clear answer: “Every Heldwein has become a master goldsmith up to and including the present.”

Finally, I am shown some of the pieces in the 1902 in-house collection, a reminder of the 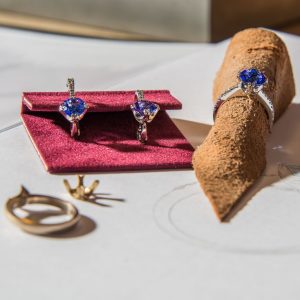 company’s founding year. It is difficult to pick a favorite – they truly are all masterpieces. I bid my farewell to the Heldwein family and stroll down the Graben, past the Plague Column. The quality of the jewelry is definitely worth a walk there!